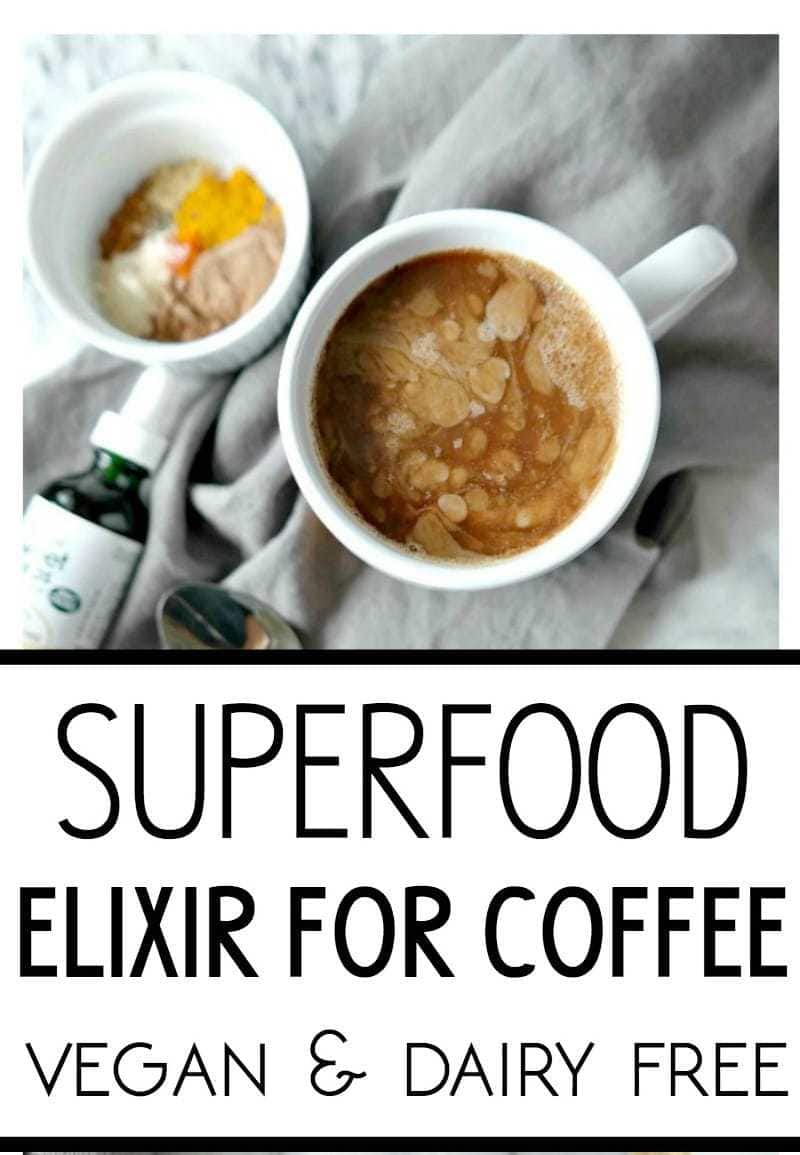 This is some NEXT LEVEL java right here.

Meet the Superfood Elixir for Coffee.

For energy and focus with antioxidants and minerals…. you will never think of coffee the same after drinking this!

Call it an addiction or obsession but I don’t think it’s the worst thing in the world (says every coffee addict). The tantalizing aroma and familiar sound of coffee brewing; it’s part of my morning routine and something I legit look forward to. Many times, I’ve been asked about my thoughts on coffee. So many of you love it BUT want to love it in a healthier way without having to give it up, if that makes sense.

I’m right there with ya. Not planning on giving it up anytime soon!

There are far worse things to be attached to, or at least that’s how my mind rationalizes it. The topic of coffee is slightly controversial in the health world because of the acidity. On the flip side, there are health benefits to drinking it but ultimately, I think it stems down to what you are adding in that makes it borderline problematic. What you put in your coffee matters. The standard american way is conventional creamer, dairy milk and heaps of white sugar or sweet syrups (like the ones they use at Starbucks).

Make it dairy-free and vegan, for starters. Avoid the chemicals and artificial sweeteners. I make it a point to buy the organic fair trade coffee beans from Trader Joe’s. I’m not chugging 6 cups a day, but I’ll savor 2 cups. On a rare occasion, I’ll have a cup in the afternoon (if I really need a pick me up) but will opt for chai tea instead, or my matcha energy drink. Drinking it black is too extreme for me, so the Silk Almond Vanilla Creamer OR unsweetened vanilla almond milk with raw coconut sugar/vanilla stevia is how I like it. Don’t forget a few good dashes of cinnamon!

Today, we’re totally amplifying your usual java with superfoods. They can and should be added to everything! Maca in smoothies. Hemp seeds in salads. Chia seeds in desserts. Turmeric and ginger in basically everything. So why not in your morning coffee?! Feeling like a superfood magician, there’s a certain blend I’ve been stirring into my morning cup for over a month now. 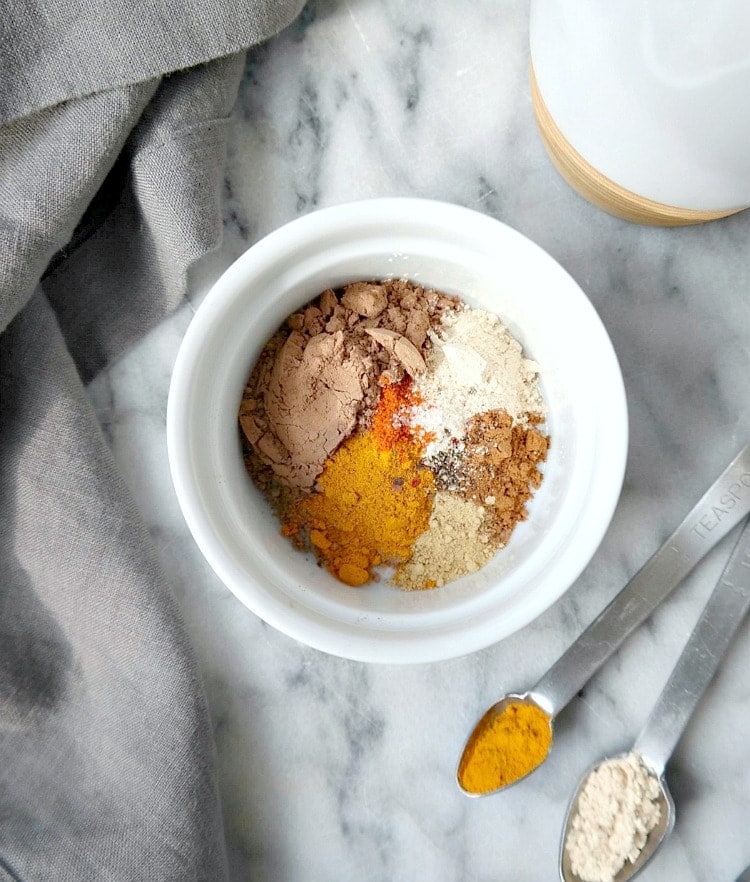 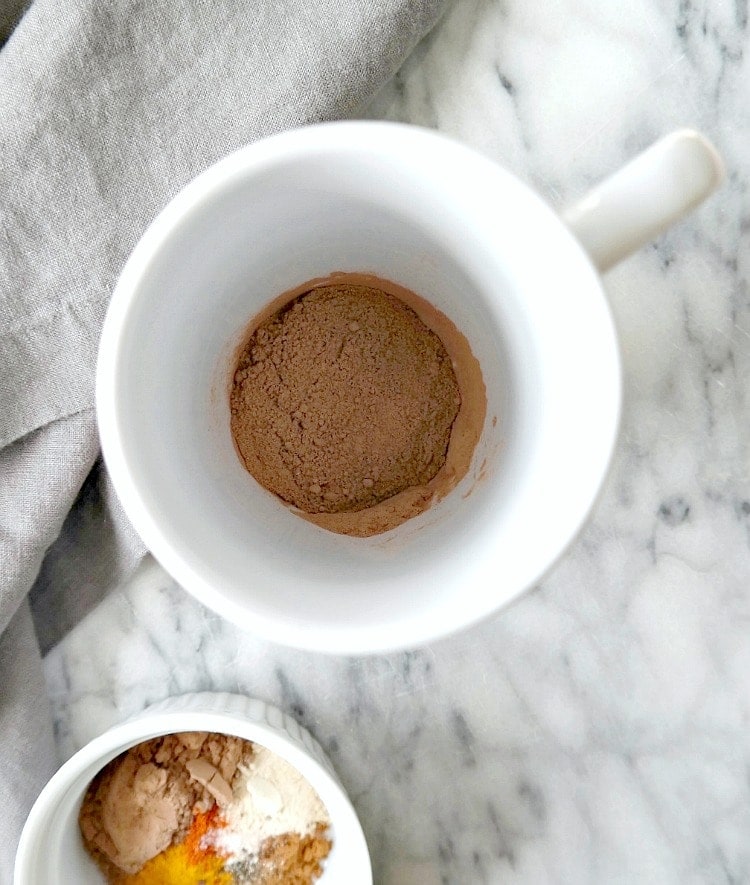 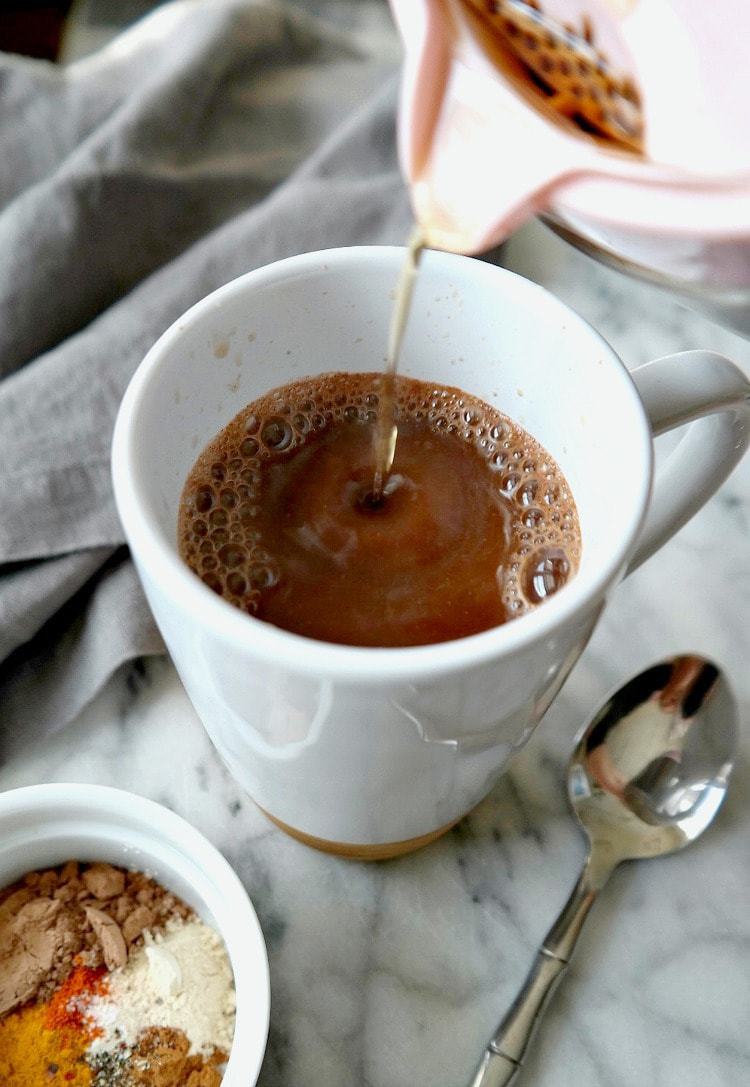 The extra boost of nutrients and energy is hard to pass up. This all started around the same time I posted my superfood Homemade Vegan Hot Chocolate that many of you loved. So this recipe has the same vibes as that.

I like to gather all the superfoods in my favorite mug, mix them up, pour the hot coffee over it, mix it again, add your sweetener/almond milk and sip away!

Here’s what you will need for this Superfood Elixir For Coffee:

Quite possibly my favorite superfood because hello, chocolate (find my favorite brand here

). Raw cacao powder is the better version of over-processed conventional cocoa powder and is one of the best sources of magnesium and iron as well as antioxidant flavanols and polyphenols. The alkaloid chemicals like theobromine, phenylethylamine and anandamine help support mental well-being and enhance our mood. With an abundance of calcium, potassium, sulfur, zinc and copper, you’ll be feeling good and nourished. A nutrient-dense superfood necessity.

My second favorite superfood. After noticing how it balances my hormones and mood (seriously though), I don’t go a day without it. I’ll add a teaspoon to smoothies, desserts, homemade snack bars and now, coffee. Maca is an energizing adaptogen that not only regulates hormones but increases fertility/libido, endurance and strength. A stress-relieving powerhouse with 31 minerals, it gives you a boost of natural energy and tons of phytonutrients (my favorite brand here

Super balancing and best known for normalizing blood sugar levels, cinnamon has antiseptic properties and aids digestion as well as nausea. Packed with manganese, fiber, iron and calcium, this classic spice adds much flavor and a slight sweetness. Not all cinnamon is the same though. Be sure to use saigon or ceylon cinnamon (vs. regular cinnamon) which have a distinct flavor and yummy scent (buy it here

Cayenne (only a teeny tiny amount):

(Totally optional!) Cayenne is known to rev up your metabolism and helps with congestion. Say goodbye to that stuffy nose. It reduces inflammation and blood cholesterol while relieving pain. Boosts your immunity too. Adding the tiniest bit goes a LONG way so be sure to add in super small amounts but I highly recommend adding a pinch to your mug as it really intensifies the flavors.

Ahh, the golden wonder spice. I?ve really grown to love turmeric, mainly for its skin-loving properties (aids in a healthy glow) but it’s also antiseptic, anti bacterial and anti inflammatory. It comes from a root similar to ginger and is high in antioxidants. Adds a beautiful bright golden color; so vibrant! Fresh or ground is fine, I used ground.

In order for our bodies to absorb the goodness from turmeric, we need just a teeny pinch of black pepper. This helps to optimize absorption by enhancing the curcumin?s (in turmeric) bioavailability, helping it get past the stomach, small intestine and into the blood. You could also add a teaspoon of raw, unrefined coconut oil but it will leave an oily film on top… so I chose black pepper.

Ginger is so essential. So healing. So digestion-friendly. With it?s natural cold fighting properties, you can battle off congestion, flu and nausea while boosting your immunity as it destroys bacteria and viruses. Great for circulation and adds a zap of flavor. Fresh or ground is fine for this mug!

Of course we need a little sweetness! I prefer raw coconut sugar in this recipe but you could also use liquid stevia (as shown in the picture) or pure maple syrup – whichever you prefer. A splash of almond milk and you’re golden. 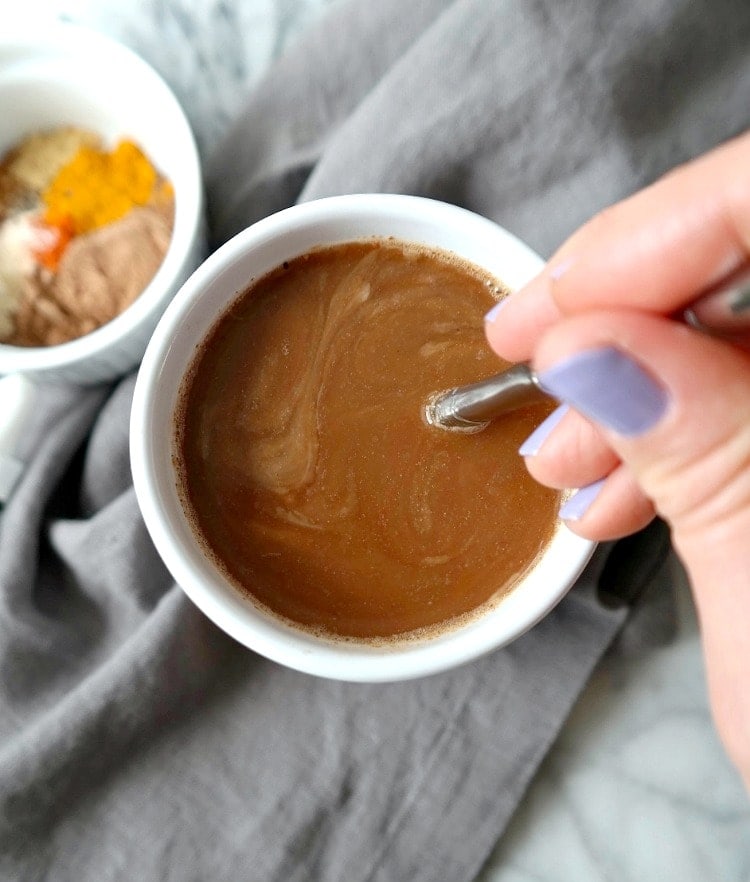