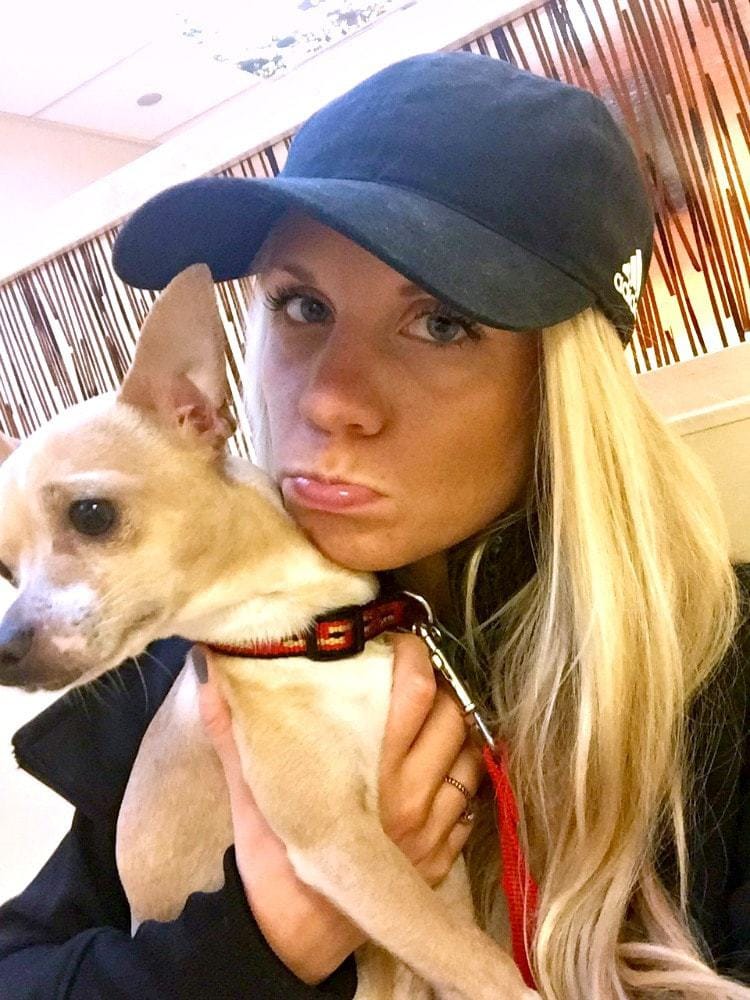 You know that “gut” feeling you get that points you in one direction more so than the other? I like to think I’m aligned with my inner guidance system, but this past Sunday I did NOT listen to the signs I was getting… which bit me in the a**, literally.

Taz and I were attacked by a german shepherd late Sunday night. Thankfully Taz is perfectly fine and unharmed, but I took a beating. If you saw my snapchat (follow: glowingfridge) you would have heard the story and seen what had happened but basically, Taz and I were taking our usual stroll before bed, a time when many other people with dogs on my street take their nightly walk before calling it a night.

While walking in the city at night, I’m VERY aware of my surroundings, always looking behind me and scoping things out, because YOU NEVER KNOW. Anything can happen, no matter where you live, but I’m especially careful living in Chicago. On this particular night, it was pretty quiet and not going to lie, things felt a bit eery. I decided to think nothing of it, to stop being a weirdo and just speed up our walk a bit. Halfway down the street, I notice a girl from my building behind us, walking her german shepherd, and scrolling through her phone at the same time. We’ve seen them a handful of times before and each time, her large dog is foaming at the mouth with vicious barks in major KILL mode, so we try to avoid them at all costs.

I felt they were walking far enough behind us that I didn’t have to worry. Just stay calm Shannon… but something kept telling me to cross the street.

Nope, I need to have no fear and stop being a weirdo, remember? Everything is fine – just continue on your usual walk. All was well for about a minute, until Taz stopped to pee, looked behind us and saw them walking… then little Taz let out ONE bark.

Since she was on her phone, not really paying attention, her grip on his leash was not enough to hold the monster back when he decided to charge us. She starts screaming and I immediately knew what was happening when I could hear the huge german shepherd barking and charging toward us (is this really happening right now?) I quickly scoop up Taz in my arms and am in the street before my life flashes before my eyes.

Within seconds my leg was being attacked like a chew toy.

This dog was in KILL mode for my precious Taz. There was no way I was letting him get my little guy. Everything is kind of a blur from there… I just remember wincing and screaming in pain, in utter disbelief that I was actually being attacked. After what felt like minutes, she finally arrived at the scene and I yelled at her to grab her dog and GET HIM THE F*** away from me.

She tied him up to a fence THANK GOD and I was already across the street in tears. She ran over and was hugging me, very apologetically and said he had never done that before, which I find hard to believe. She couldn’t believe he bit me, so I pulled down my pants (yep, I could have cared less at that point) and even though it was dark, we saw puncture wounds, teeth marks, scratches and lots of blood… enough to make me queasy and speechless.

You know when an injury doesn’t feel real until you see it? Yep, I immediately connected the pain with the bites and went into shock.

At this point, she was crying too and offered to drive me somewhere but all I wanted was to get inside my safe apartment and away from the scary world. I know where she lives in my building and knew I could easily find her if needed. Limping back, I was shaking and sobbing but realized things could have gotten a lot worse. Better my leg as a chew toy than my tiny 7-pound chihuahua who stands no chance to a 100+ pound male german shepherd…

Dogs are precious animals to me and I’m sure to many of you too. I’ve never felt any fear towards dogs because my experiences have been only positive, up until this point. When I see “mean” dogs, I wonder what might have happened to them in the past, to make them that way. What have they been through that they feel compelled to show their teeth at everyone passing by? Anyways, that girl has no business owning a german shepherd in a studio apartment, in my opinion. They need space and a yard and a proper environment. Now I have the wounds to show for her lack of responsibility and awareness.

My leg will heal with time and with what I’m sure will be a solid few scars as well as a lesson learned:

Follow your intuition when it is screaming at you.

One little bark was all it took to provoke this dog. You just never know.

Now I’m scared to walk outside and feel traumatized but thankful that we are okay and I know it could have been a lot worse. I felt the need to share this story because that “gut” feeling we get is very much a real thing… it’s also a tricky thing because I went against it from wanting to have no fear, but I guess it depends on the experience.

Now, walking alone at night in the city and following my intuition definitely wins over the “having no fear” mentality.

There’s a major difference that is now, crystal clear.

Have you ever been bit by a dog? What are your natural tips for quick healing with minimal scarring? Some of you on snapchat have mentioned coconut oil, aloe vera, tea tree oil and goldenseal. I’ve been using coconut oil until it heals further and then will try the others but it’s still very raw and painful!

Feel free to let me know your tips and tricks below!